Stickball resembles the modern European game of lacrosse, using ball sticks which are made by hand from hickory. A small ball, made of deer hair and hide, is tossed into the air by the medicine man. The male players use a pair of the sticks, and female players use their bare hands. In earlier times, only the men with the greatest athletic ability played the game. The game was oftentimes played to settle disputes, and the conjurer for each team often became as important to the team as the players themselves. Seven points are scored when the ball strikes a wooden fish or ball on the top of a pole approximately 28 feet in height, and two points are awarded when the ball strikes the pole. In earlier days, there would be a dance before the ballgame. The ballplayers were the participants of the dance, along with seven women dancers. Each woman represented one of the clans. Throughout the dance, the women would step on black beads which represented the players of the opposing team. The conjurer had placed these black beads on a large flat rock. Today, stickball is an important part of the days activities at ceremonial Stomp Grounds, being necessary to play before the Stomp Dance can ever begin. 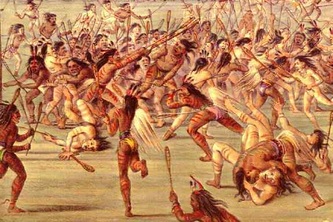