"Grandfather Tells"
Also known as...
"The Wolves Within" 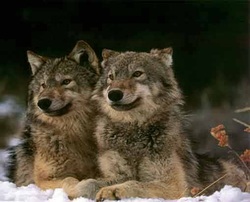 An old Grandfather said to his grandson, who came to him with anger at a friend who had done him an injustice, "Let me tell you a story.

I too, at times, have felt a great hate for those that have taken so much, with no sorrow for what they do.

But hate wears you down, and does not hurt your enemy. It is like taking poison and wishing your enemy would die. I have struggled with these feelings many times." He continued, "It is as if there are two wolves inside me. One is good and does no harm. He lives in harmony with all around him, and does not take offense when no offense was intended. He will only fight when it is right to do so, and in the right way.

But the other wolf, ah! He is full of anger. The littlest thing will set him into a fit of temper. He fights everyone, all the time, for no reason. He cannot think because his anger and hate are so great. It is helpless anger,for his anger will change nothing.

Sometimes, it is hard to live with these two wolves inside me, for both of them try to dominate my spirit."

The boy looked intently into his Grandfather's eyes and asked, "Which one wins, Grandfather?"

The Grandfather smiled and quietly said,   "The one I feed."


~ The Teaching of Tecumseh ~

Live your life that the fear of death

can never enter your heart.

Trouble no one about his religion.

Respect others in their views

and demand that they respect yours.

beautify all things in your life.

Seek to make your life long

and of service to your people.

Prepare a noble death song for the day

when you go over the great divide.

Always give a word or sign of salute when meeting

or passing a friend, or even a stranger, if in a lonely place

Show respect to all people, but grovel to none.

When you rise in the morning, give thanks for the light,

for your life, for your strength.

Give thanks for your food and for the joy of living.

If you see no reason to give thanks,

the fault lies in yourself.

and robs the spirit of its vision.

When your time comes to die, be not like those

whose hearts are filled with fear of death,

so that when their time comes they weep and pray

for a little more time to live their lives over again

in a different way.

Sing your death song, and die like a hero going home.

The Great Spirit Bear
The Kermode Bear or "Spirit Bear"

The spirit bear is a unique subspecies of the North American black bear in which approximately one in every 10 bears is white or cream-colored. Some have orange or yellow coloration on their backs. Other Kermodes are all black. The scientific name isUrsus americanus kermodei, named after a naturalist and museum curator named Frances Kermode of the British Columbia Provincial Museum. The term "Spirit Bear" is possibly attributed to First Nations tradition, which held that the white bears were to be revered and protected. Today the Tsimshian people call it "moskgm'ol," which simply means "white bear."
Kermode bears may have evolved on the coast in the last 10,000 years from black bear stock that became isolated from interior black bears more than 300,000 years ago.
The white color may be due to inheritance of a single gene for hair color, but other more complex mechanisms may be involved. Further genetic research is needed.
Where Spirit Bears Live
The spirit bear is a unique creature. It lives only on the Pacific coast of British Columbia, in Canada. The spirit bear is what scientists call an "umbrella species," that is, if a large enough suitable habitat can be protected for the spirit bear, many other species sharing the same ecosystem will also be protected under this umbrella; for example, salmon, birds, wolves, deer, grizzly bears, insects and many others.   Rarely, a white bear is reported from other black bear populations elsewhere in North America but these are from different subspecies. 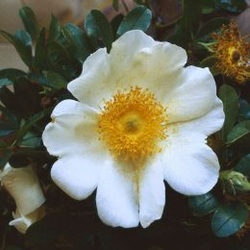 Seven petals for seven tribes
growing on the trail where they cried.
Center of gold for the land white men stole.
Four thousand of my ancestors died.
The trail was long, the journey harsh
crossing a thousand miles of mountain and marsh
and in the place where proud people those
cried the tears that watered Cherokee Rose.

Oh Spirit Wolf, oh Spirit Owl
hear the winter winds that howl.
Oh Spirit Eagle, oh Spirit Deer
why did so many have to die here?

One nation prospered, one nation fell.
One went to heaven, one was sent to hell.
Cherokee Rose that blooms in spring
reminds us of the songs they sing.

White petals, a sign of those tears
that still wet the ground after a hundred fifty years
remind us all of what was lost
from proud people who bore the ultimate cost.

Seven petals for seven tribes
growing on the trail where they cried.
Center of gold for the land white men stole.
Four thousand of my ancestors died.
*
~ Cherokee Prayer Blessing ~
May the Warm Winds of Heaven, Blow softly upon your house. May the Great Spirit, Bless all who enter there. May your Mocassins, Make happy tracks in many snows,and may the Rainbow Always touch your shoulder.
*
~ Cherokee Prayer ~
When you were born, you cried and the world rejoiced.
Live your life so that when you die, the world cries and you rejoice.
~ Cherokee Expression ~
O' Great Spirit, help me always to speak the truth quietly, to listen with an open mind when others speak, and to remember the peace that may be found in silence.
*
~ Cherokee Travelers Blessing ~

I will draw thorns from your feet
We will walk the white path
Of life together
Like a brother of my own blood
I will love you.
I will wipe tears from your eyes
When you are sad
I will put your aching heart to rest
*
Indian Soul-mates

Man does not measure the stars. It is a gift he can not count. So it is with my love for you.
How can I tell you of my love? Strong as the eagle, soft as the dove,
patient as the pine tree that stands in the sun and whispers to the wind...'You are the one!'
*
Prayer for The White Man

And now, Grandfather, I ask you to bless
the White Man.

He needs your Wisdom, your guidance.
You see, for so long,
he has tried to destroy my people,
and only feels comfortable
when given power.

Bless them, show them
the peace we understand,
teach them humility.
For I fear they will
someday destroy themselves
and their children,

As they have done so Mother Earth.
I plead, I cry.
After all, They are my Brothers....... *
An Indian Prayer

I give you this one thought to keep,
I'm with you still. I do no sleep.
I am a thousand winds that blow.
I am the diamond glints on snow.
I am the sunlight on ripened grain.
I am the gentle autumn rain.
When you awaken in the morning hush,
I am the swift uplifting rush,
Of quiet birds in circled flight
I am the soft stars that shine at night.
Do not think of me as gone
I am with you still, in each new dawn.
Do not stand at my grave and weep
I am not there, I do not sleep.
Do not stand there at my grave an cry
I am not there, I did not die.

Oh Great spirit,
grant that I may never find fault
with my neighbor until I have walked
the trail of life in his moccasins.

As I walk the trail of life
In the fear of the wind and rain
Grant O Great Spirit
That I may always walk like a man.
*
A Cherokee Prayer

Great Spirit
I am alive
Great Spirit you are all
That is and has ever been!
I was born to say,
"I Love You!"
Help remind me through the day
That love should be my only goal,
My only thought in what I do,
And my only inspiration.
For without love,
I Am Lost,
I am Lonely.
*
CHEROKEE PRAYER

"CREATOR GAVE YOU TWO EARS...
AND ONE MOUTH...
SO YOU CAN LISTEN,
TWICE AS MUCH,
AS YOU SPEAK."

OH GREAT SPIRIT, WHO MADE ALL RACES, LOOK KINDLY UPON THE WHOLE HUMAN FAMILY AND TAKE AWAY THE ARROGANCE AND HATRED WHICH SEPARATES US FROM OUR BROTHERS...
*
LOVING SUN

"JUST AS THE SUN WARMS THE EARCH,
LOVE WARMS OUR LIVES."

MAY YOU HAVE THE STRENGTH
OF EAGLES' WINGS,
THE FAITH AND COURAGE TO
FLY TO NEW HEIGHTS,
AND THE WISDOM
OF THE UNIVERSE
TO CARRY YOU THERE
*
A NATIVE PRAYER

O GREAT SPIRIT
MAKE ME WISE, SO THAT I UNDERSTAND
THE THINGS YOU HAVE TAUGHT MY PEOPLE
LET ME LEARN THE LESSON YOU HAVE HIDDEN
IN EVERY LEAF AND ROCK
I SEEK STRENGTH, NOT TO BE GREATER THAN MY BROTHER
BUT TO FIGHT AGAINST MY GREATEST ENEMY - MYSELF
*
ANCIENT INDIAN PROVERB

WITHOUT LOVE OUR SELF- ESTEEM WEAKENS. WITHOUT IT OUR COURAGE FAILS. WITHOUT LOVE WE CAN NO LONGER LOOK CONFIDENTLY AT THE WORLD. WE TURN INWARD AND BEGIN TO FEED ON OUR OWN PERSONALITIES AND LITTLE BY LITTLE WE DESTROY OURSELVES. 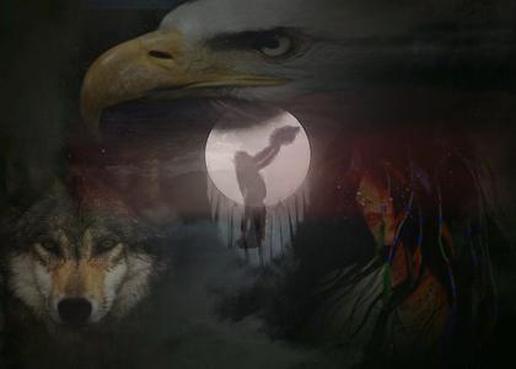